It’s not every year that you see a festival’s logo carved into a watermelon. Indeed, this was a very special year for the Lowell Folk Festival. We celebrated 30 years of presenting the best in traditional music, craft, and foodways. Here are some images from the Folk Craft & Foodways area which featured a sampler of traditions. 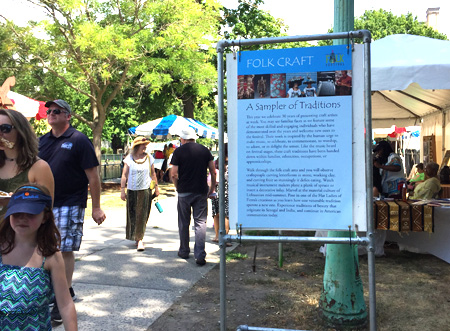 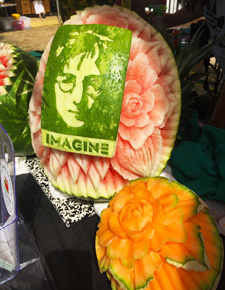 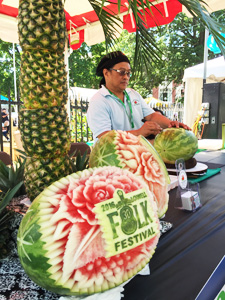 The craft area featured a few other ephemeral arts, including the daily ritual of kolam that adorns the thresholds of homes, temples, and streets throughout India. The practice is carried on here in New England by members of Tamil Makkal Mandram, Inc. 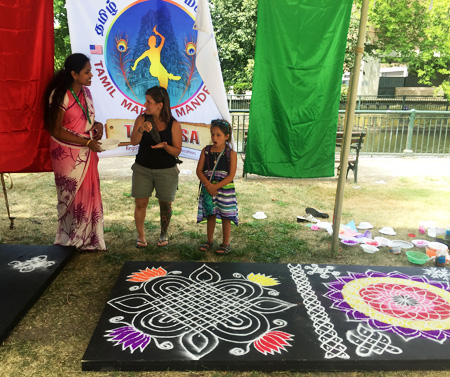 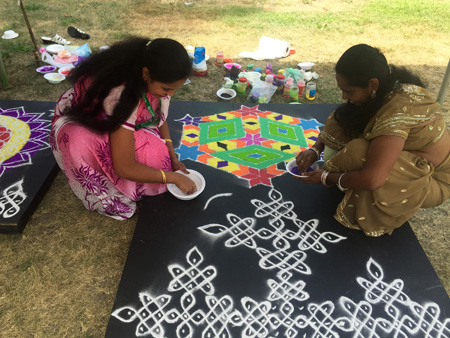 In addition to demonstrating kolam using colored stone dust, the artists provided an opportunity for visitors to try their hands at it. 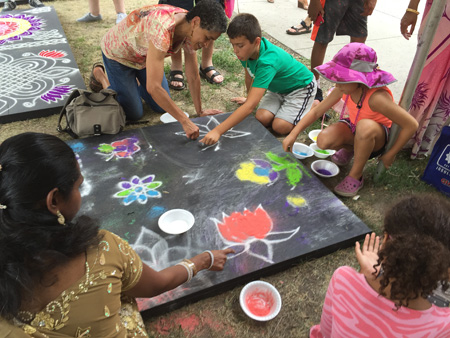 Traditions of folk beauty from around the globe were on display. Festival goers could get their hair braided in cornrows or have their skin temporarily tattooed with henna. Sellou Coly, a native of Senegal, and her niece Aissatou-Ba Dieme, and Margy Green, and her niece KK braided hair. Lujuana Hood of the Pan African Historical Museum in Springfield, shared her wisdom about hair culture from Africa to America. 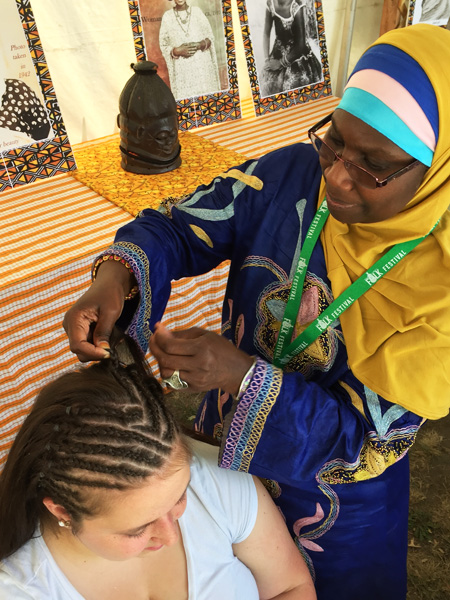 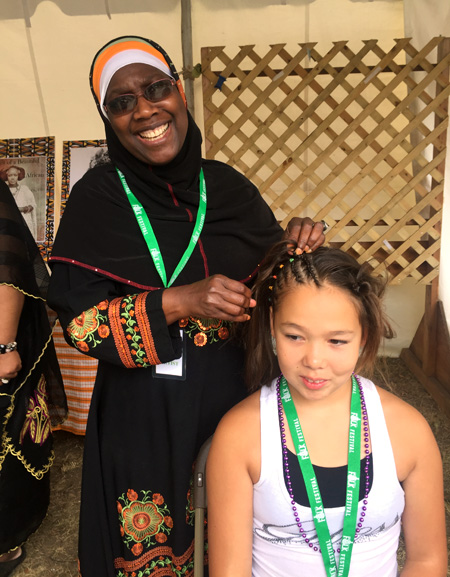 Late morning on Sunday, two young Inuit girls from Ottawa sat down to have their hair braided. They were due to perform Inuit throat singing at St. Anne’s stage at noon. Their aunt explained traditions of Inuit hair braiding, while Lujuana regaled us with stories and folklore about African American hair culture dating back to the time of slavery in this country. As a way of thanks, the girls gave a private performance of throat singing for the hair braiders and then they all posed together for a picture. 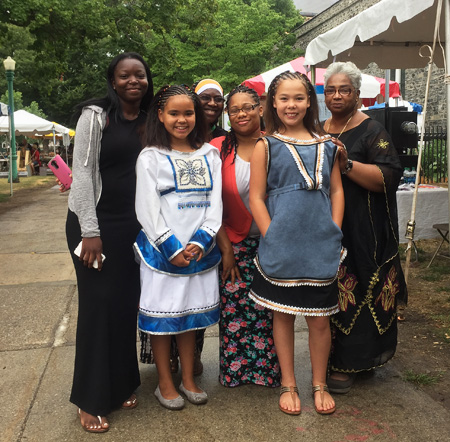 Noureen Sultana and her 13-year old son Danish Khan shared their skills in applying mehndi, also known as henna. This ephemeral art form is customary for brides in India, Pakistan, and parts of the Arab world. When applied, the henna is 3-dimensional. After a few hours, it flecks off, leaving a rust colored stain which lasts for up to two weeks. Danish’s younger brother also pitched in. The line of people waiting to be adorned never let up. In fact, late on Sunday, when Noureen and her family was packing up, a father came by with his four-year son in his arms. The boy’s mother and sister had gotten henna tattoos earlier in the day. It was well after 5:00 p.m. Noureen and her sons, who must have created over 200 henna designs, had pretty much packed up their tools and supplies. The father told his son it was too late to get henna and he broke into tears. Noureen, a mother and dedicated artist, kindly made an exception, giving the boy a floral henna design on his tiny hand. 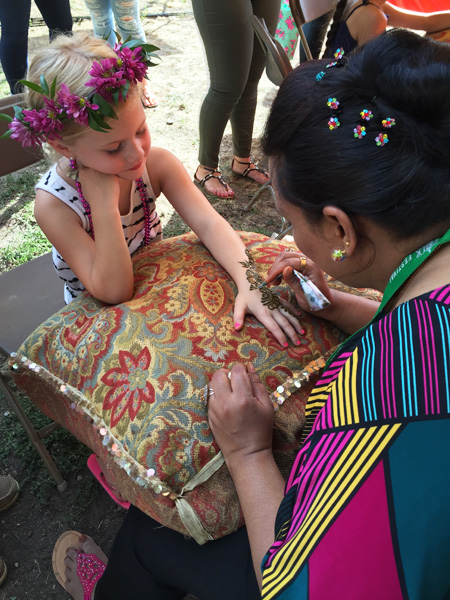 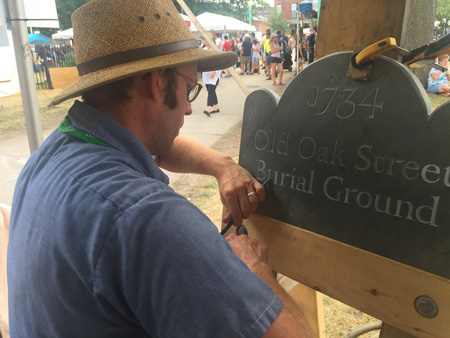 Stephen Earp, a redware potter from Shelburne Falls, demonstrated turning plates, vases, and bowls on his hand built treadle wheel. In addition to working at the wheel, he shared his vast knowledge of the history of pottery production in New England. 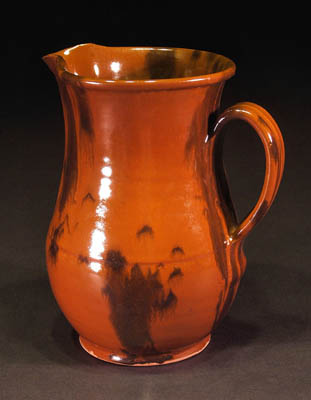 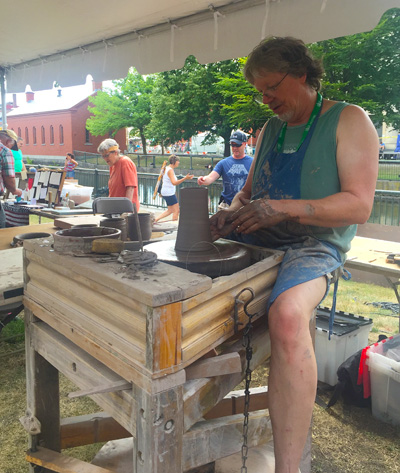 The musical instrument maker’s tent featured the work of luthiers William Cumpiano and Chris Pantazelos. They displayed cuatros, guitars, requintos, ouds, and bouzuokis in the making, as well as finished instruments.  An added treat was having musicians Kacho Montaluo, Brian Ausbigian, and Kinan Adnawi playing music in the back of the tent.  Throughout the weekend, a few musicians from the audience joined in the informal jam session. 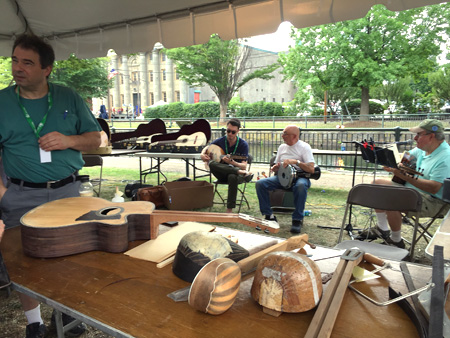 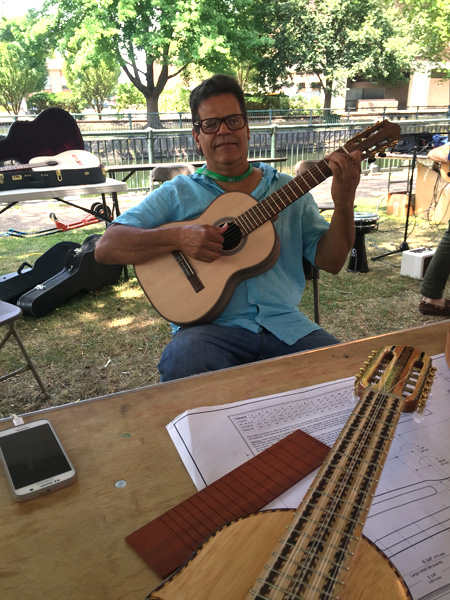 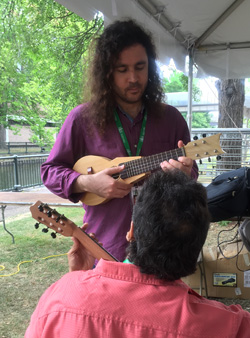 With any luck, the next generation will be inspired to play. 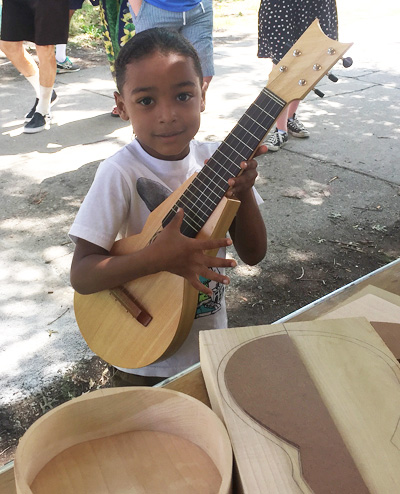 With exception of redware vase, all photos by Maggie Holtzberg, 2016

One thought on “Snapshots from a Festival: Folk Craft & Foodways Celebrate 30 Years”