Recently my colleague Maggie Holtzberg and I were interviewing ornamental blacksmith Carl Close, Jr., in West Newton as part of fieldwork for the 2018 Lowell Folk Festival. I met Carl in 2001, when arranging for him to demonstrate his smith work at that year’s event, where the theme was The Arts of Preservation and Conservation.

Another artisan, Jim Ialeggio of Shirley, was a window restorer for historic houses and buildings. When Carl’s wife Susan, co-manager of their Hammersmith Studios, looked at a lock on one of Jim’s windows, she said, “This looks like Carl’s work.” Indeed it was. Carl and Jim met, the two artisans began doing business directly, and cut out the middle broker. It’s festival moments like this—when artists meet, admire each other’s work, and forge bonds—that we folklorists live for.

The 20th festival in 2006 featured crafts traditions from across New England. Abenaki basketmaker Jesse Larocque, from Vermont, was pounding black ash to make the splints for his baskets. He started out Saturday pounding a large log and by Sunday afternoon it was merely the size of a walking stick. I happened to go past as two women were commenting, “Now I know why baskets are so expensive,” seeing the amount of physical work, as well as artistry, that goes into them. Another festival moment for me, a visual teachable moment.

The 2003 festival showcased regional textile traditions. Quilter Sally Palmer Field, of Chelmsford, was a native Lowellian whose father brought her scraps from the mills during the Depression to make her dolls’ clothing. Later, she collected and incorporated mill scraps into her quilts and other fabric art works.

Her wall hanging, “Mile of Mills,” sewn with Meyer’s thread, drew many comments of recognition from women who’d worked in the mills and at the Ideal Dress Factory, in particular. Not only did Sally’s work incorporate her Lowell roots, but it was a collective commemoration of the city’s textile past, including pieces of nylon woven for parachutes during the Second World War. For those women, Sally’s work wasn’t just art or history; it was the stories of their lives. If only I’d had my tape-recorder running. 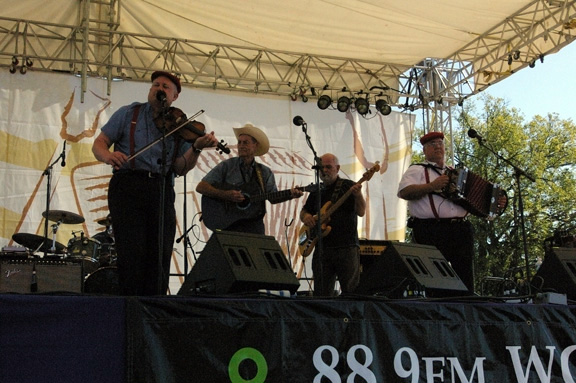 If you’ve ever been to the Lowell Folk Festival, the American Folk Festival in Bangor, Maine, or the Smithsonian Folklife Festival on the nation’s mall, you might wonder how particular musicians or craft artists get chosen to participate. Folklorist Chris Williams writes of his experience planning a portion of the 2008 Richmond Folk Festival here. It’s a good read. And so are the other essays you can find posted on the Mid Atlantic Forum. The Mid Atlantic Arts Foundation initiated this series to further the exchange of information and ideas among folklorists and their peers. Sally Van de Water, who curates the series, served as city folklorist for Boston back in 2003.