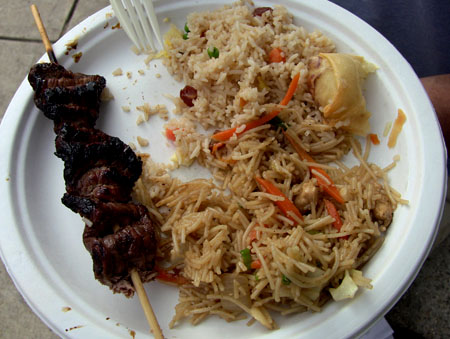 Music isn’t the only draw of the Lowell Folk Festival. Unique to the festival are the ethnic food booths run by local churches, temples, and non-profit organizations. Festival-goers come to sample the variety of international food, handmade by volunteers. These food booths are often family affairs, with young children and teenagers working side by side with their parents. 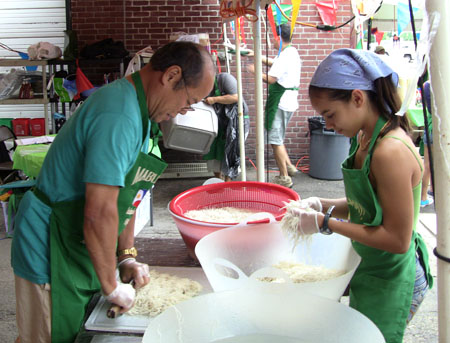 During the festival, ethnic food booths line French Street behind Boarding House Park. Near the corner of Kirk and French, the Filipino food booth is always one of the most popular, with infamously long lines every weekend. Profits benefit Iskwelahang Pilipino, a cultural and language school in Bedford, and many families who attend the school volunteer to help cook and run the booth. Small children play in the alley behind the tents, young girls serve fried rice and noodles, men barbeque beef, and women roll turon (banana fritters). 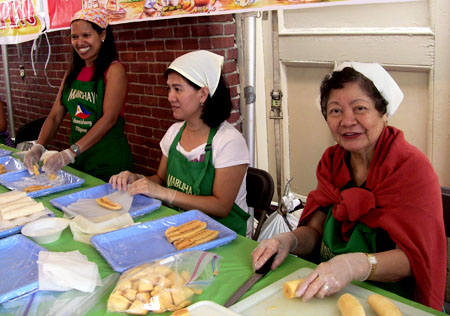 Although he’s only 18, Joseph Umali has been volunteering for ten years. “I used to be one of the kids hanging out back,” he said. He started out by serving food, and now is in charge of the cash register and running beef from the truck to the grill. Last year he was one of three young volunteers awarded scholarships from the Lowell Festival Foundation for their service at the various food booths. Working at the festival is something he looks forward to every year, calling it “such a blast.” People from different food booths help each other. “It’s all one big community,” he said. 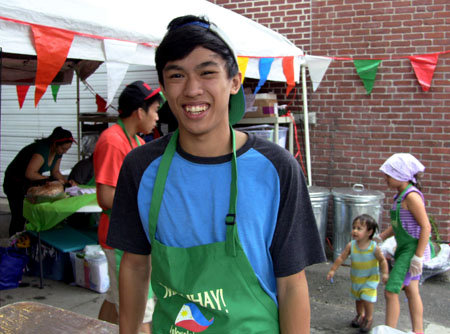 Both his parents are originally from the Manila area and his family is actively involved in the school and the festival. According to their website, one of goals of Iskwelahang Pilipino is to “develop in Filipino-American children a strong positive ethnic identity and instill pride in the students’ cultural heritage.” Joseph hopes to visit the Philippines either as an exchange student or after graduating from college. 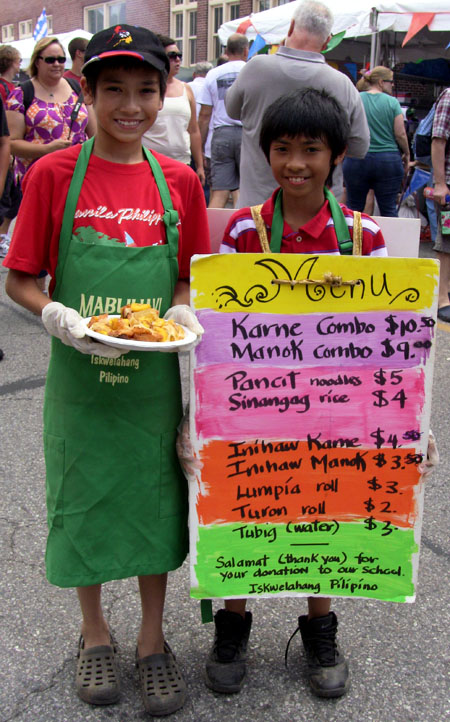 Several booths down from the Filipino booth, facing Boarding House Park, the Parekh family is busy serving Jamaican beef patties, Indian vegetable curry and samosas. Edith Parekh first ran a food booth for the 1986 Regatta Festival to benefit the Celebration of Life non-profit organization, now called Seed. Along with her husband Nalin, and later her four children, Anissa, Natasha, Noah, and Naomi, she has participated in every Lowell Festival. Former Lowell State Senator Dan Leahy, whom Edith calls the “spirit of the organization,”  founded Celebration of Life to help benefit the Mustard Seed orphanages in Jamaica after he saw the plight of poor children in Kingston. There he met Father Gregory Ramkissoon, a priest from India, who founded the orphanages 1978. Naomi spent one year in Jamaica as a Fulbright scholar working with Father Gregory helping orphans stigmatized by HIV. This year’s profits from the Seed booth will go to help both Lowell charities as well as Jamaican orphanages. Any leftovers will be donated to a homeless shelter. 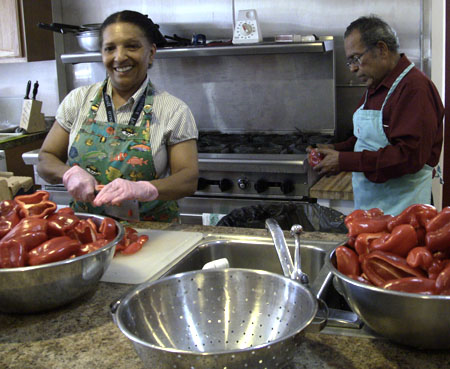 Edith’s mother immigrated from Jamaica to Canada as a young girl. Nalim came to the U.S. from India for university. Together they prepare both Jamaican and Indian food for the festival.  Before the festival, they chopped 15 pounds of red peppers and175 pounds of boneless chicken and cooked a couple of 100 pound bags of rice. The Jamaican beef patties, wrapped in pastry, sell out every year. This year Naomi added her own recipe for rum cupcakes. 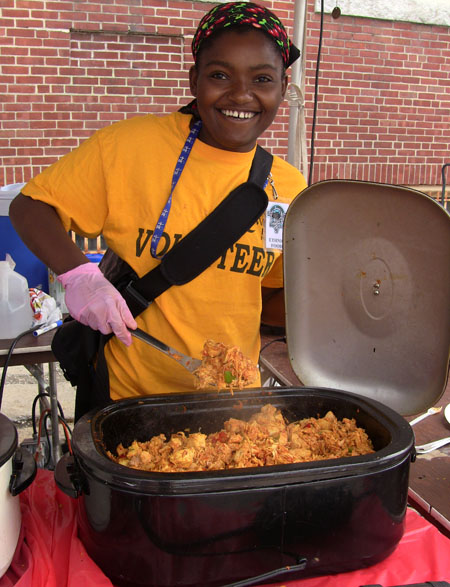 For Edith “the real essence of the festival is the last few hours of the festival when vendors all start eating each other’s food.” The Filipinos eat watermelon from the Seed stand, Naomi eats beef on a stick from the Filipino right in front of her mother’s food booth. “Ethnic camaraderie what it’s all about” said Edith. 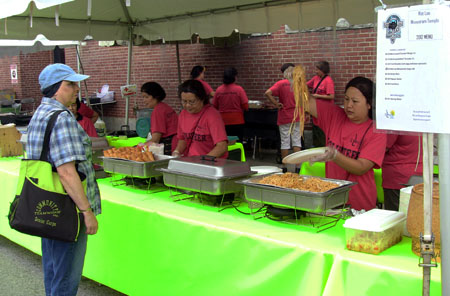 Next to them, Emma Phachansiry serves fried noodles at the booth benefiting Wat Lao temple in Lowell while Suvana Phomma makes spicy papaya salad with fish sauce, chili pepper, shrimp paste, lime, and tomatoes. Nearby in Boarding House Park, Nana and Dan Dunn from Gloucester enjoy plates of Filipino beef barbeque, fried rice, and spring rolls while waiting for the music to start. They have come to almost every festival since 1988 and come as much for the food as for the music and art. “It’s wonderful to see real people making food,” said Nana, noting that the festival is a major fundraiser for the ethnic groups. She said the food is “prepared with love,” and represents the diversity of cultures. Nana said at the festival you can find out about cultures you don’t know about and “food adds a dimension to that experience.” 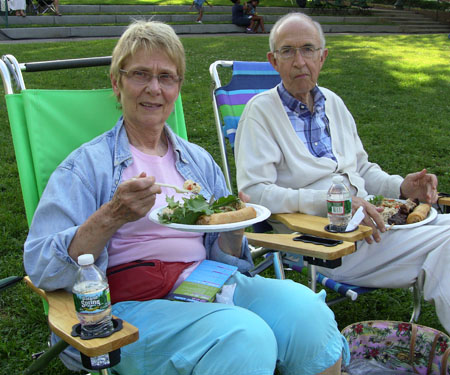