It’s that time of year when the MCC’s Traditional Arts Apprenticeships are wrapping up for the year. As part of the grant program, recipients are required to share what they have learned in a public presentation. This coming Sunday, May 19th, two master/apprentice teams will perform musical selections and share some of the joys and challenges of transmitting musical heritage. The free presentation takes place at Lowell National Historical Park Visitor Center theater, 246 Market Street and will begin at 2:30 p.m. 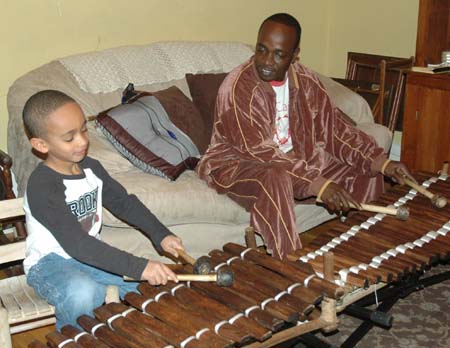 Two continents. Two ancient percussive traditions. And two young people with the good fortune to be born into musical familes headed by master musicians. Balla Kouyaté is a virtuoso player of the balafon, the ancient West African ancester of the xylophone and marimba. Above, you see him teaching his son Sekou the balafon. 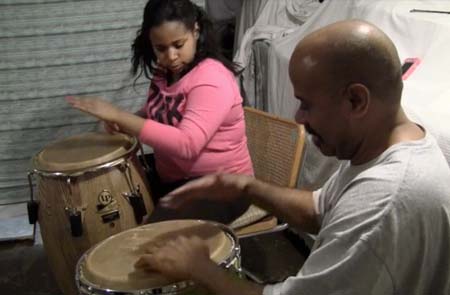 Sixto “Tito” Ayala comes from a legendary music and dance institution in Puerto Rico – the Ayala family. He is pictured here teaching a conga rhythm to his daughter Estefany Navarro.

Come see and hear how West African djeli music and Puerto Rican bomba & plena are being passed on from one generation to the next. 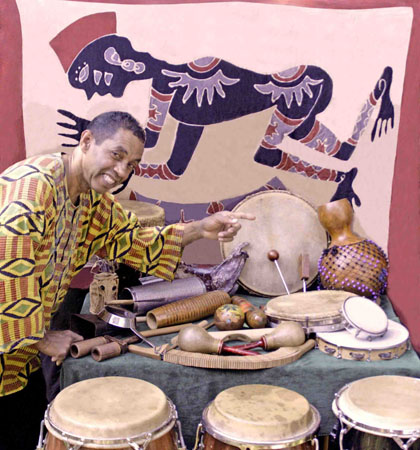 Expect an interactive experience featuring music, dance, lore, and stories steeped in the African ancestry of Puerto Rican culture. Try your hand with a Puerto Rican percussion instrument. Learn how to move to the beats of bomba and plena. Be surprised by two carnival masqueraders wearing typcial vejigante masks of the season. 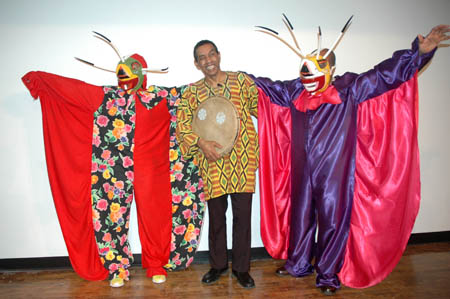 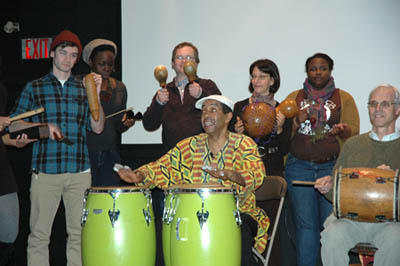 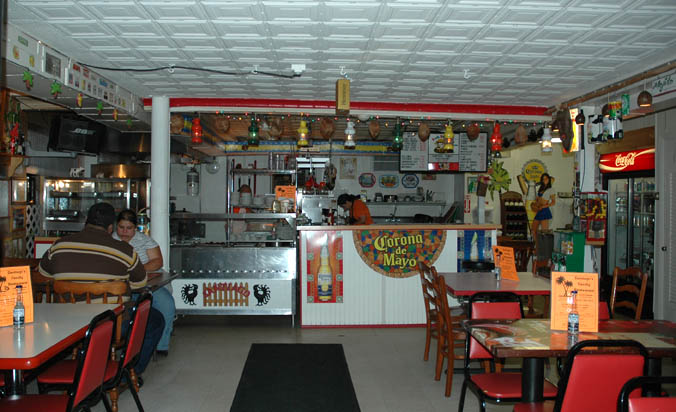 Ever since hearing Grupo Canela at the National Heritage Museum on October 4th and learning that they perform each weekend at their family restaurant in Westfield, I wanted to go. This past Friday, four of us drove out from Boston. We arrived around 5:30 and decided to walk around downtown before going into the restaurant. With its wide streets and empty storefronts scattered in amongst the businesses, Westfield has the feel of a town that has seen some hard economic times. 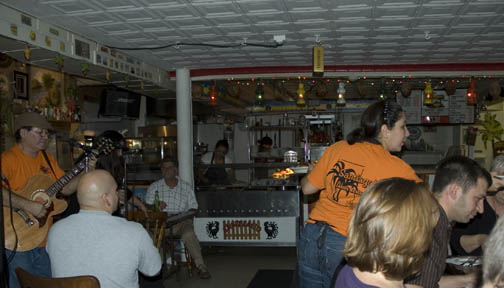 Upon entering the restaurant, I introduce myself to a young woman behind the counter who turns out to be Alexa Santiago, the oldest daughter of the Santiago family. Welcoming and astonishingly cheery, she ends up doing the lion’s share of waiting tables and serving on this evening. She takes peoples orders like she is hosting a family meal. If someone asks for the restroom, she tells them, “You have to go through the kitchen, just like you’re at home.” Alexa introduces me to Carmen Santiago, Ismael’s wife. 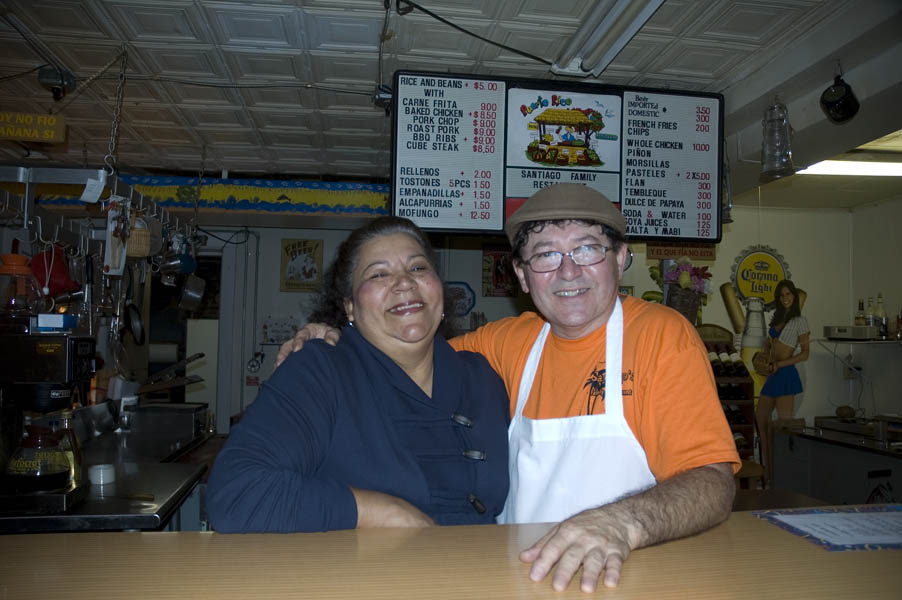 Born and raised in Corozal, Puerto Rico, Carmen and Ismael grew up and went to school together. Soon after graduating high school in 1967, they left Puerto Rico for Hartford, Connecticut in order to find work. After a few years, the Santiagos moved to Holyoke and eventually settled in Westfield. They have been running the restaurant in its current location since 1999. Like many immigrants, they had every intention of going home but with six children and seven grandchildren, they have built a life here. “We thought we’d go back home,” Carmen says, “but the family grows.” 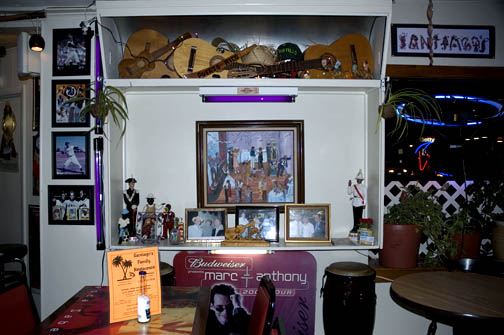 The restaurant’s décor is festive and full of intriguing artifacts – like a Puerto Rican version of Cracker Barrel. Colored glass lanterns and hanging coconuts, guitars, congas, and cuatros, maps of Puerto Rico, vintage beer signs, knick-knacks and figurines, and framed photos of Puerto Rican baseball players. Like many of the storefronts along Elm Street, this one has a pressed tin ceiling. There are only ten tables. A few diners appear to be regulars. Some sit, others do take-out, including a local policeman on his beat.

The kitchen is visible from the dining room and the sounds and smells of cooking are enticing. Ismael has just taken a pork roast out of the oven, its fatty skin crisped to a golden brown. He lifts lids on giant skillets to reveal yellow rice and chicken fricassee. Ismael nods toward the later and inhales, “Ahh . . .that’s like dying and going to Heaven.”

By 6:45pm, Ismael is anxious to start playing. Beatriz grabs a microphone. Josúe is out back somewhere, so a customer from the audience steps up to play bongos. By the next number, Josúe arrives and takes up the congas. They play from 7:00 p.m. to 8:30 p.m. and then take a break. Listen to a live recording here.

This is the place to see this music. The food and music are inextricably linked. Everyone has a role – singing, playing percussion, taking orders, singing, preparing and serving food. The youngest of six, Marcos, is in his early twenties. He sings close harmony with his sister Beatriz, lovingly throws his arms around his mother’s neck, and helps out in the kitchen. Here you see him using a mortar and pestle to crush garlic, lime, and cooked plantain, which is served with a cold seafood salad. I ask Carmen about recipes – Beatriz answers, “They are more of our country, than just our family.”

Santiago’s Family Restaurant is located at 34 Franklin Street in Westfield, Massachusetts. The live music is only on Friday and Saturday evenings. Phone: 413.562.0210 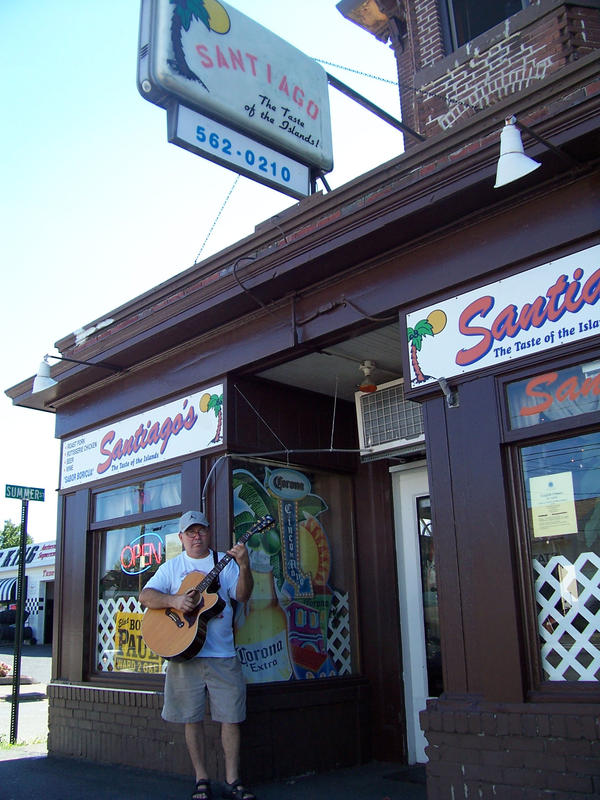 A native of Puerto Rico, Ismael Santiago has been living in western Massachusetts for nearly 30 years. For the past 12 of them, he has led Grupo Canela, a family band which plays jibaro music. This style of folk music — a blend of Spanish, West African, and Taino influences, first developed in the rural, mountainous interior of Puerto Rico. Grupo Canela also plays salsa. Ismael and his family run Santiago’s Family Restaurant in Westfield, Massachusetts, which offers authentic Puerto Rican food. On Friday and Saturday evenings, members of the nine-piece group come out of the kitchen, play a couple of pieces, and then go back in to continue cooking and serving. After a certain point, they all come out to play again, until late into the night.

We coaxed members of Grupo Canela to not only come out of the kitchen, but onto the stage at the National Heritage Museum earlier last month. Their set was a big hit at the concert we held in conjunction with our ongoing exhibition, Keepers of Tradition: Art and Folk Heritage in Massachusetts. Listen to a taste of Grupo Canela here (5MB) playing “Son de la Loma.”

Next on the docket is a trip out to Santiago’s Family Restaurant to hear and taste this cultural experience in its locale.